Traditional music and dance from Colsama 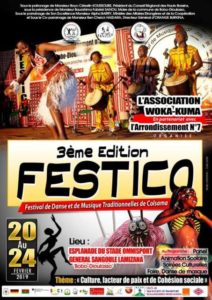 FESTICO is happening under the direction of Mahamadi from the association WOKA KUMA in ccoperation of the townhall Nr 7 of Bobo Dioulasso in the district of Colsama with dance, music and the round table, held every two years alternately with the National Cultural Week SNC (Semaine Nationale de la Culture), to the appreciation and promotion of the Cultural and tourism industries.
Cultural exchange with Burkina Faso FESTICO

AHOI was the Artistic Direction „Creative Bridge to Burkina Faso“
Cultural and Social Bonding for students and adults.
with a panel discussion, Workshops at german speaking schools & Lange Tafel e.V